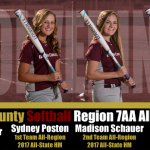 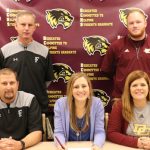 Sydney Poston, starting short-stop for the DCHS Lady Wolverine Softball team, made her commitment to Shorter Softball official today by signing her letter of intent. Sydney was surround by family, friends, and coaches while she signed her scholarship. The Hawks are coached by Danielle Brewer, who began coaching at Shorter in 2016 and was named 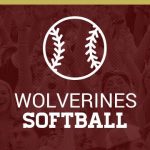 The 2016 edition of the Lady Wolverine Softball program finished the regular season strong, winning four in a row heading into the region tournament as the #2 seed.  After earning a first round bye, the Lady Wolverines defeated Armuchee for the third time this season by a score of 8-5.  In the winner’s bracket final,

Tuesday, August 25, 2015 5:00 PM Darlington School AWAY 5 Dade County High School HOME 6 Game Recap In the first region contest of the year, the Lady Wolverines came away with a huge win, despite some adversity. Dade County took an early 2-0 lead in the first inning, but four costly errors and two

Friday, August 21, 2015 7:30 PM Dade County High School AWAY 8 The Lovett School HOME 6 Game Recap In the second game of the Dalton Lady Cat Invitation, the Lady Wolverines faced AA foe Lovett. The Lady Wolverines came out on top despite being down 5-0 in the first inning. Cassie Higdon hit a