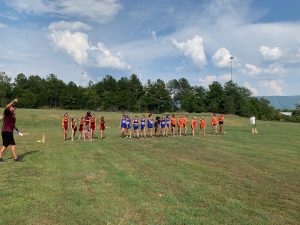 The DMS Cross Country Team wrapped up their season this past Friday, October 4th at Heritage in the NGAC Championship.

In the boys race, Carter Christiansen finished 14th overall in a time of 12:51. He was followed by Chase Mayo in 26th, Kyler Pardue in 28th, Jack Dupree in 30th, Brayden Christopher in 44th, Jace Anderson in 57th, and Dru Durham in 61st. There were 90 total boys in the race. The boys finished 3rd out of 8 teams.
In the girls race, Anna Ballard claimed the 2019 NGAC Championship with her 1st place finish in a time of 12:04. Anna completes her middle school cross country career with 3 straight NGAC Championships. She was followed by Chloe Ballard who received a medal for finishing in the top ten with her 9th place finish. Emma Vandergriff and Lydia Snay finished right outside the top ten in 12th and 16th respectively. There were 48 total girls. The girls did not have a team score because there are only 4 runners and you must have 5 to score.
This wraps up a fantastic season by the DMS Cross Country team. During the course of the season the team ran at Heritage, Baylor, Dalton, Armuchee, Woodland Park Baptist in the McCallie Invitational, and hosted the first home meet in the history of Dade Cross Country. All of the DMS runners worked extremely hard in extreme heat and showed great improvement and character throughout the season. They represented Dade County in fine fashion.
Coach Durham and Coach Thomas would like to thank all of the runners for their hard work and for the parents and school system for its support. The team this year consisted of:
6th grade boys: Rock Chaney, Jonathan Dupree, Walt Konrad, and Tanner Miller.
6th grade girls: Chloe Ballard and Lydia Snay
7th grade boys: Clay Allman, Jace Anderson, Carter Christiansen, Brayden Christopher, Chase Mayo, Elliot Mullins, and Kyler Pardue.
7th grade girls: Emma Vandergriff
8th grade boys: Jack Dupree, Dru Durham, Grant Mcbryar, and Wilson Rogers.
8th grade girls: Anna Ballard.
Wolverines Official Sponsor